Live Square, which is already under construction at Gediminas Avenue, will bring business, art and technology together

It is envisaged that after the construction of Live Square, it will provide a conducive environment where experts and enthusiasts alike in the fields of business, art and technology will cooperate, and the exchange of knowledge and ideas will take place. This was the vision behind the construction of the Live Square in Gediminas Avenue, in Vilnius. Technological and artistic synergy was evident during the “capsule burial ceremony.” During the presentation at the capsule burial ceremony, a traditional capsule was replaced by a levitating brick. Symbolically, it was laid onto the foundation not by the construction company or the contractor, but by the artist Julijonas Urbonas who walked horizontally on the foundations of the space being built by hovering in the air and telling people about the cities of the future. 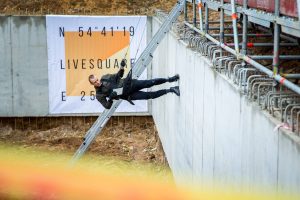 The multifunctional Live Square space, which consists of a business center, apartments, public space with an outside roof terrace, a square with an interactive sculpture and fountain, as well as an international hotel in the form of Hilton Garden Inn, will be opened at the intersection of Gediminas Avenue and V. Kudirkos Street in spring 2019.

According to Domas Dargis, Managing Director of Eika, the city development company that is behind the construction and development of the Live Square, the aim of this project was to contribute to the revitalization of this part of Gediminas Avenue, as well as bring more motion and life to this centrally located but drowsy place.

According to Dargis, “The goals are growing with the projects. Our current ambition is to create a unique space in Vilnius where we would predict and think about what will happen in the future. Architecture and urban development are always focused on the future, while art and technology help us to imagine and know it more precisely. We will work closely and create the Live Square together with experts in these field. The first synergy between business and art that will take place parallel to the construction site, and it will be the space where we can exchange and develop ideas for future cities. Also, it is worth mentioning that the first visionary is Julijonas Urbonas, an artist, designer, researcher, and PhD at the Royal College of Art in London. 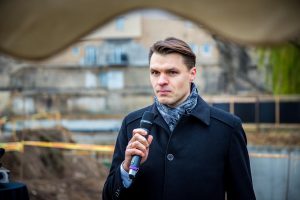 According to the Head of Eika, interest in the Live Square has exceeded anticipatory expectations. Nearly 66% of the business center and shopping gallery area has already been rented out. Sorainen, a law firm, has agreed to rent 2,100 sq. m. of office space, while Spaces, a world class office space provider will also be renting more than 1,500 sq. m. of office space. In the same manner, IWG, a global leader in the provision of flexible global workplaces will also be renting office spaces in the Live Square.

The future source of inspiration

Remigijus Šimašius, Mayor of Vilnius city, who participated in the presentation, drew attention to the changing face of the city and the increasingly reviving main city artery – Gediminas Avenue.

According to him, “In the section from Lukiškės Square to the Seimas, Gediminas Avenue is becoming more and more intense and I have no doubt that these business ideas will be noticed and the Live Square will gradually bring even more new winds to the lives of the city residents. I hope there will be more and more of such conceptual spaces and hopefully they will align with the city network as we have it in Vilnius city map.”

According to Marybelle Arnett, Vice President of Hilton Worldwide for East and Central Europe, “Recently, hotels focus not only on the highest quality of the services and servicing, i.e. mandatory criteria for any prestigious hotel, but also on the interesting experience. The vision and ambitions behind the Live Square project have impressed, us and we are sure that it will not only be a place for relaxation, but also a place where people can draw inspiration.” 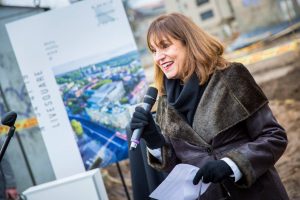 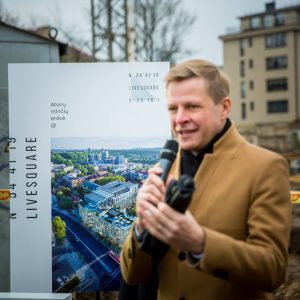 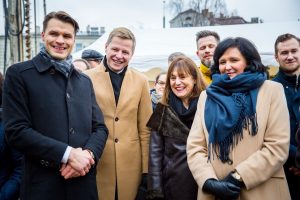 Today, J. Urbonas, an artist, researcher, engineer, Vice Rector of Vilnius Academy of Arts, and PhD at the Royal College of Art in London announced the start of the Live Square establishment. He put a brick capsule into the wall of the (still under construction) Live Square while levitating, i.e. walking horizontally on the foundation of the building.

He was full of praise for the project, saying, “We are going on a long journey together with Eika to look for the answers to the question of what future cities will be like. We’re looking beyond the next 5 or 10, but rather at what cities will be like in the next 100 or even 1,000 years. From the Lithuanian identity in space to the creation of visionary and speculative scripts, today, we’re experiencing what levitating cities would look like. We’re trying to imagine how hovering in the air would be a means of movement in the absence of gravity, if we were to live in a place far removed from our universe.”

In the nearest future, after the construction of the Live Square, it will be launched in co-operation with J. Urbonas, and will feature artistic performances, lectures and other events which will be open to all guests, as well as city residents. 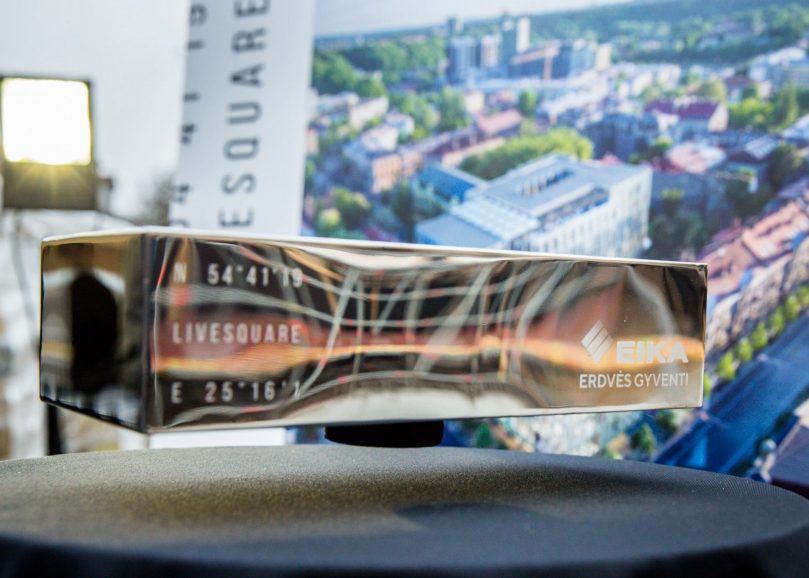 Didin‘t find a dream home?
Look at our other real estate projects: